Because a district’s ability to fund expenditures is measured by its property wealth per member, districts with a higher property tax base receive less aid from the State. In 2017-18, 54 rural lake area and suburban districts with high property values are receiving less than $1,000 per pupil in general aid (equalization and special adjustment), compared to a statewide average payment of $5168. Fifteen of these districts do not qualify for equalization aid, but only receive special adjustment aid which is a “hold harmless” payment equal to 85% of a district’s prior year’s general aid payment. Six high property value districts no longer receive any general aid payment.

The establishment of a $1000 per pupil minimum aid guarantee in the school aid formula is not only a matter of fairness, but it would address concerns that the continual loss of state general aid among high property value school districts is placing an unfair burden on local taxpayers. Consider that the 54 school districts currently receiving less than $1000 per pupil had general aid payments totaling $30.3 million in 2010-11 compared to $14.3 million in 2017-18, for a reduction of $16.0 million, or -52.7%. The statewide change in aid payments during the same period of time is a reduction of $50.5 million or -1.1 %, to $4.24 billion in 2017-18 from $4.47 billion in 2010-11. The rationale in support of a guaranteed $1000 per pupil minimum aid includes the following key points:

According to the Legislative Council, the proposal appears to increase the uniformity of the state school funding system by providing a minimum funding floor of $1000 per pupil in addition to the constitutionally required educational opportunity floor.

According to the LFB, had the proposal been in effect for the 2017-2018 school year, 53 high property value school districts would have received $25.7 million, which is just 0.6% of total net general aid payments of $4.884 billion. The intent is that the minimum aid guarantee would be funded as part of a statewide increase in the general aid allocation.

21 “No Aid” School Districts located mostly in small lake area communities in northern Wisconsin, do not qualify for Equalization Aid (shown in red on map and list).

33 “Primary Aid Only” School Districts, located in resort area and suburban communities, only receive Equalization Aid under the first tier of the school aid formula (up to $1000 per pupil) (shown in salmon on map and listed in black). 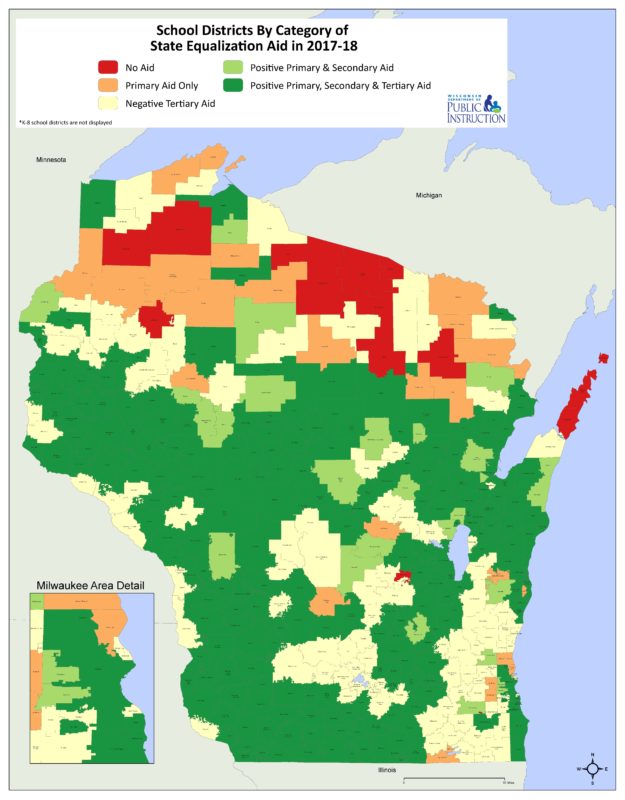 School Districts by Category of State Equalization Aid in 2017-2018