Under the proposal, no public school district would receive less than $1,000 per pupil in equalization aid and special adjustment aid.

The establishment of a $1,000 per pupil general aid guarantee would prevent the ongoing shift of public education costs in high property value school districts to local property taxpayers. Between 2010-11 and 2021-22, there was a 65.4% reduction in net general aid to the 51 high property value school districts that received less than $1,000 per pupil, from a total $21.6 million to $7.5 million. By comparison, statewide net general aid increased by 10.8%, from $4.47 billion to $4.95 billion.

Continually declining general aid is contrary to the statutory purpose of the state school aid formula [1] to cause the state to assume a greater proportion of the costs of public education and to relieve the general property of some of its tax burden.

According to the Wisconsin Legislative Council, the provision of a minimum funding floor in addition to the constitutionally required educational opportunity floor would increase the uniformity of the state school funding system. Click here for aid comparison printout. [1] Purpose of General Aid: Wisconsin Legislature: 121.01 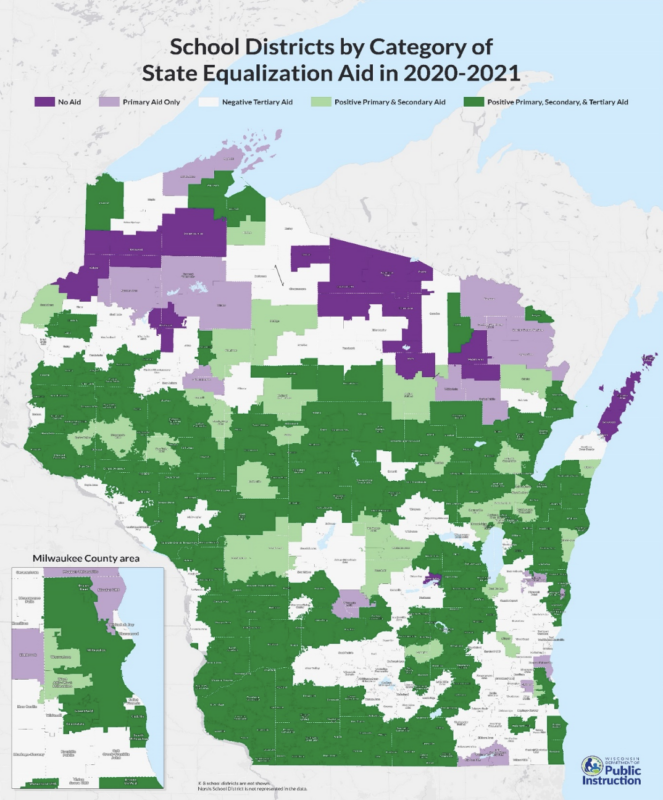 “No Aid” and “Primary Aid Only” high property value school districts are disproportionately located in resort areas of the state where tourism is a main driver of the local economy, as shown on the Department of Public Instruction’s State Equalization Aid map to the left.

This means they no longer even receive special adjustment aid, which is meant to mitigate severe declines in aid by limiting the aid loss to 15 percent a year (ensuring the district gets at least 85 percent of the previous year’s eligibility).